I’ve Been in a Car Accident, What Should I Do? – Part I 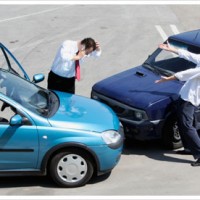 No one is ever prepared for an accident, but there are several things to keep in mind:

With around 6 million car accidents every year in the United States, there are a minimum of 11 car accidents occurring every second of every day. By car insurance estimates, individuals file a claim for a collision about once every 18 years. If you’re an average driver, you’re likely to experience three or four accidents in your driving lifetime – and at least one by the time you reach the age of 34. With such a high likelihood of getting into an automobile accident, it’s a good idea to know what to do if an accident occurs.

Make Sure Everyone Is Okay

When an accident occurs, the first thing to do is to make sure that you and everyone else involved is okay and to get out of harm’s way. Check to see if the occupants in your vehicle are injured, as well as the drivers and occupants of the other vehicles. If someone says they need help, call 911. Move your vehicle out of harm’s way, if it is safe to do so.

Any time an automobile accident occurs, you should always call the police. In the event of a minor accident, police may instruct you to file a report or may not respond to the scene, but they’ll still record the incident, which can be important for insurance coverage purposes. Getting the police involved gives you a valuable resource if a dispute should arise over the accident. The police will write a traffic report detailing the condition of the vehicles and the likely scenario based on feedback from the drivers involved, as well as any witnesses. In the event that the accident was caused by a traffic violation, the officer may ticket the individual who committed the violation. The police officer can be a potential witness and can testify to certain matters, including the condition of the persons or vehicles involved in the accident, and the condition of the accident scene if the case should ultimately go to trial.

Be Mindful of What You Say

When you’re speaking to the police, tell the officer what happened to the best of your recollection. Stick to the facts and try to keep emotion out of it, if possible. Don’t admit fault, even if you think you’re the one at fault – simply state the facts and let the professionals worry about the question of fault.

Swap Insurance Information with the Other Driver(s)

Get the Names and Numbers of Witnesses

Witnesses can be critical to proving your version of what happened in a car accident. Make sure you collect the names and phone numbers of any witnesses who saw the accident. This is another detail that the police may include in their official report. However, the police aren’t always able to identify all witnesses to an accident, since they may not arrive immediately. It’s a good idea to talk to witnesses yourself because they may leave the accident scene before the police arrive. Again, do not discuss fault with any potential witnesses — just the facts of the event.

Take Photos of the Vehicles

Put your cell phone to use again to take photos of all vehicles involved at the accident scene. You should thoroughly document not only your damage, but damage to the other vehicles. If you don’t have thorough photo documentation evidence of damage to your and the other party’s car at the scene of the accident, this potentially critical evidence can be lost forever.

The most important thing to remember at the scene of an accident is to help those in need, move yourself out of harm’s way, stay calm, and get the police involved. Avoid getting into a confrontation with the other driver, and make sure you’ve got thorough documentation of what happened, including photos of the vehicles. Properly documenting a car accident scene can save a lot of trouble after the accident, especially if there’s any doubt or dispute about what happened.

And finally, if you’ve been injured in an automobile accident, enlist the aid of an experienced Personal Injury Lawyer to help advise you of your rights and options. A good attorney can help you take the appropriate steps to move forward with your claim.